Location of venues on map and image gallery of stadiums.

The 2011 ICC Cricket World Cup will take place between February 19 and April 2, 2011 in 13 different venues in India, Sri Lanka and Bangladesh.

All the venues of the 2011 Cricket World Cup were announced on November 2, 2009 in Mumbai by the International Cricket Council. In Sri Lanka, two new stadiums have been constructed for the World Cup. They are located in Kandy and Hambantota. 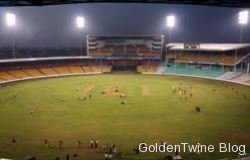 Admin/Author: Subrato Paul, owner of GoldenTwine Informatics founded in April 2003, lives in Kolkata, India. He is a freelance website designer, Internet marketer, social media enthusiast, and blogger. He writes in his blogs and as a guest writer about marketing and social media, eCommerce, website design and development, and his website. See all articles by Subrato Paul

Did you like this article? If you're new to goldenTwine blog, you may want to
Subscribe to RSS feed: | Comments RSS | Email Subscription
Social Media:
Short Link: https://wp.me/pPMoR-uv | Thanks for visiting!

This site uses Akismet to reduce spam. Learn how your comment data is processed.