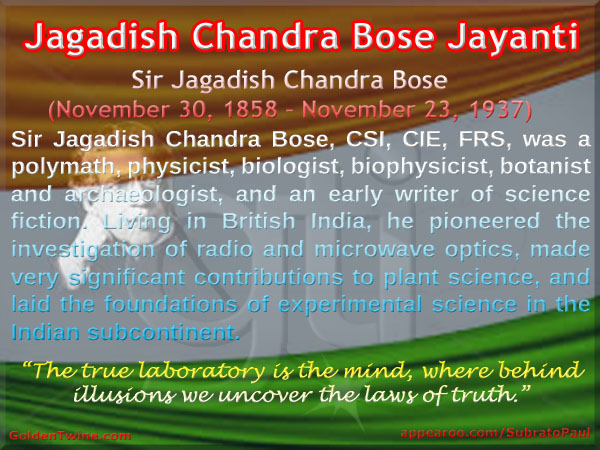 Bhai dooj and bhai phonta celebrate the bond between a brother and sister.

Bhai Dooj is a festival celebrated by Hindus of India and Nepal. It is also known as, Bhai Phonta in Bengal, Bhai Bij or Bhau Beej in Gujarat, Maharashtra, Goa and Karnataka, Bhai Tika in Nepal. Diwali is a five-day festivity. The celebrations begin with Dhanteras and conclude with Bhai Dooj. The festival symbolizes the beautiful bond of a brother and sister. On this day, sisters pray for a happy and prosperous life and good health of their brothers, while brothers vow to protect the sisters.

Today marks the 107th birth anniversary of Professor Subrahmanyan Chandrasekhar (October 19, 1910 – August 21, 1995), a renowned Indian astrophysicist who was awarded the 1983 Nobel Prize for Physics with William A Fowler. His mathematical treatment of stellar evolution yielded many of the best current theoretical models of the later evolutionary stages of massive stars and black holes. The Chandrasekhar limit is named after him. S Chandrasekhar is the first astrophysicist to have won a Nobel Prize for his theory on the evolution of stars.

Diwali, also known as Deepavali, the Hindu festival of lights celebrated every year in autumn. One of the most popular festivals of Hinduism, it spiritually signifies the victory of light over darkness, good over evil, knowledge over ignorance, and hope over despair. The festival falls on Amavasya Tithi (new moon day), in the month of Kartik according to the traditional Hindu calendar. Diwali 2017 is celebrated on October 19. Diwali is the five days festivity period which begins on Dhanteras and ends on Bhaiya Dooj.

Kali Puja, also known as Shyama Puja or Mahanisha Puja, is a Hindu festival dedicated to the goddess Kali, and celebrated especially in West Bengal, Odisha, and Assam. The festival falls on Amavasya Tithi (new moon day), in the month of Kartik according to the traditional Hindu calendar. Kali Puja 2017 is celebrated on October 19. Goddess Kali symbolizes shakti (strength), seen as divine protector, and bestows moksha (liberation). Goddess Kali is worshiped in the late night. It is believed that she will destroy all evils in human beings and outside world.

Dhantrayodashi marks the beginning of five day festivities of diwali.

Dhanteras also known as Dhantrayodashi or Dhanwantri Jayanti is revered by Hindus across the world as a festival of health, wealth, and prosperity. It also marks the beginning of five day festivities of Diwali, which is celebrated to honour the home coming of lord Rama to Ayodhya after 14 years of exile. The Hindu festival falls on the Krishna Paksha (dark fortnight) Trayodashi (thirteenth day after full moon), in the month of Kartik according to the traditional Hindu calendar. This year Dhanteras falls on October 17, 2017.

Promises next day delivery of groceries and household supplies at lowest prices.

Discounts, blockbuster deals, cash back, no cost EMI and exchange offers from October 14 to 17.

The e-commerce platform Amazon India is a renowned online store selling genuine products from top brands. Amazon is back with the Great Indian Festival (October 14 – 17, 2017). The Amazon Great Indian Festival sale is back for the third time and perhaps last this year! The first two sales were great success. The sale has gone live on October 14 and will go on till October 17. It is the great Diwali Sale, and it is going to rock you with awesome deals and offers! This is the last chance to save big on festive shopping.

World Mental Health Day (October 10) is a day for global mental health education, awareness and advocacy against social stigma. The theme of this year’s World Mental Health Day, observed on 10 October, will be focusing on mental health at workplace. Get a great night’s sleep naturally with a FREE 30-Day supply of Sleepzyme. Fall asleep easier, faster and wake up feeling great with this special blend of sleep-enzymes.

The official free plugin for wordpress from amazon associates program.

Celebrating on this auspicious day the holy union of a wife and husband.

Karva Chauth is a one-day sacred festival celebrated by Hindu  married women mainly in northern India, in which they observe a nirjala vrat (fast without food and water) for the whole day until they sight the moon for the long life and immense prosperity of their husbands. Sometimes, unmarried women join the fast for their fiances or desired husbands. The festival falls on the Krishna Paksha Chaturthi (fourth day after the full moon), in the month of Kartik according to the traditional Hindu calendar. Karva Chauth 2017 is celebrated on October 8.

Lose The Back Pain
For over a decade, the Healthy Back Institute has helped over 240,000 people find lasting relief from their back pain, neck pain and sciatica.
www.losethebackpain.com
Stupid.com
Like Geeky Gadgets? Check out Stupid.com's full assortment of Gag Gifts for Nerds, Geeks, and all our Intellectual Stupidity!
www.stupid.com
Barton Publishing
Specializes in providing natural health alternative remedy reports that are safe, effective and affordable.
www.bartonpublishing.com